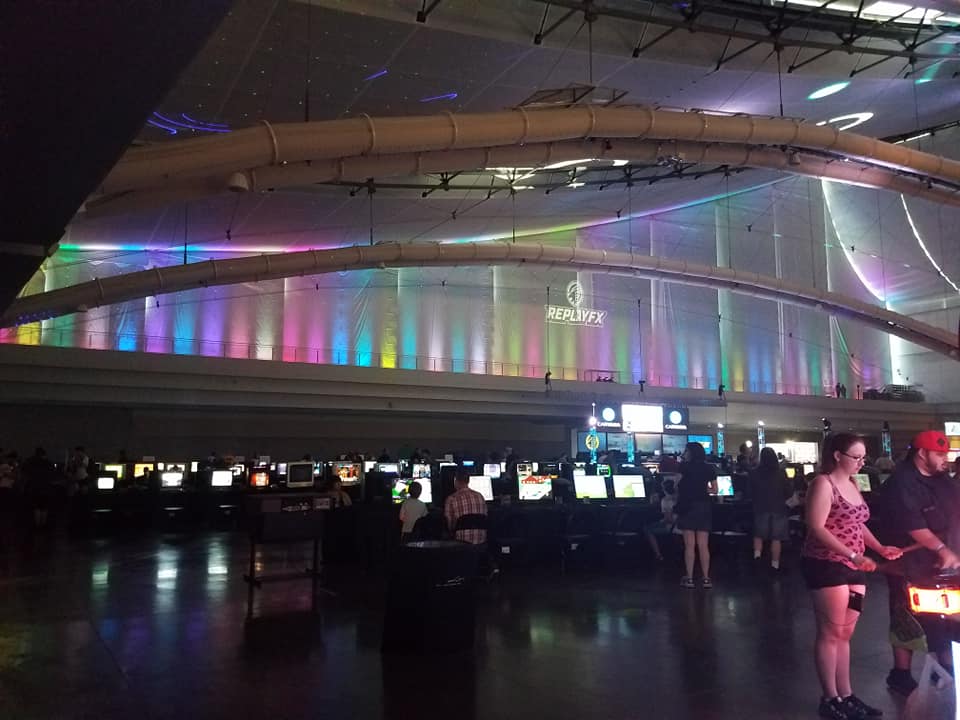 I attended Replay FX, a retro gaming convention in Pittsburgh PA. I really enjoyed my time there, and definitely plan to return next year as well. The convention includes hundreds of arcade games, console games, and board games. All of the electronic games are from the 80s-90s with no modern games in sight so it’s definitely aimed at Retro gamers.

They had tournaments for Dr Mario, Tecmo Bowl, and Smash Brothers, to name a few. They also had a cosplay competition. There are large cash prizes for all of the competitions. We didn’t enter any competitions this time, but I did cosplay, just for fun. I brought out my Love Live School Idol Festival Kotori Cosplay Costume again – I’ve been wearing it a lot lately, and also plan to wear it again soon for Animu at the Zoo also in Pittsburgh, PA.

All of the games are free of course, because you’re paying for admittance to the convention. There are lots of vendors too selling stuff – some of the things they’re selling may be questionable – like rom/emulator things that come preloaded with thousands of games – pretty sure that’s illegal to sell lol. I almost bought one though, because it is pretty cool – I’ve seen similar on wish and aliexpress. Or you can of course get your own roms online for free – which is illegal if you don’t own the actual games – but in my case, I do own like 80% of the games still I have all my consoles, from 80s, 90s, 2k, etc. But of course I can’t have them all hooked up all the time, too many wires, not enough space, etc, which makes having the roms very handy.

The board games were out in a separate more quiet space and provide a nice break from the flashing lights and sounds of all of the electronic games.

Back in the main hall they also had a giant ferris wheel that lit up later in the evening. I didn’t ride it, because it was a very unique ferris wheel – it flipped upside down…. It looked scary as heck to be honest lol. Each car rocked and shook back and forth and occasionally turned completely upside down. The cars are all enclosed of course so you don’t fall out, but still uhm no thanks lol.

Later in the evening, they also had live music, but it was hard to hear over the sounds of all the people and all the games.

There are food concessions on site, including alcohol, but it’s over priced, and most of the food is terrible. You can bring your own food – even if it’s against their rules, no one checks bags there.

Which brings to the next point, with all the crazy things happening in our country, you’d think they would have SOME type of security there…. There were no metal detectors, no one checking bags, and I didn’t see a single guard or any kind of personnel…. With thousands of loud chaotic games and thousands of people…… this is just a recipe for disaster… And it would be hard to contain or control the chaos, there’s 2 escalators, 1 up/1 down, and maybe some stairs somewhere but I didn’t see/know where. And the escalators and halls and everywhere were super crowded. It’s billed as the largest retro gaming convention in the US.

I didn’t really think about that at all while I was there though, and felt perfectly safe, but in retrospect, looking back, I wish they had more security in place. You just can’t trust crazy people these days. I don’t want to get into politics of it… But I will say video games are not to blame. Think about it… They have the exact same games in dozens of other countries, Europe, Asia, Japan, South Korea, Canada, even South America – and you know what they don’t have? Mass Shootings… you know why? Because they have gun control laws and mental health care (or any kind of health care for that matter).

Games are not to blame… I don’t play super violent games like shooting games, call of duty, rainbow six,  and whatever else, they just aren’t fun or interesting to me (no story, no cute graphics, snoozeville lol) … So I could care less about if people sell them or play them… But I just think it’s ridiculous that they think banning them will do any good to stop these events from happening. United States needs to look at the rest of the world and “get it together” when it comes to these 2 things, gun control, and health care including mental health care, before it is too late.

We also are more diverse than most other nations. And for some reason, a large number of Americans don’t like other Americans who are different from themselves, and it’s not just white people either. My hispanic boyfried told me that he and his friends consisting of another hispanic and 2 asians and 1 white person, were rejected/kicked off a soccer field by some indian people the other day.  All this hatred and racism towards each other is at the heart of all this violence, and until we address those issues, these problems are only going to escalate. Even if we do get reasonable gun control laws and better health care, we still need to find a way to stomp out racism.

Anyways I diverted a little bit from the topic here… but yeah… the only complaint I REALLY have with Replay FX is that it might be highly unsafe due to lack of security measures especially in midst of current events in our country right now. I would like to see metal detectors, guards checking bags at the gates – even if that means I can’t bring my own food/drink next year, and guards walking around up and down inside the convention also. We have to be smart and be safe. That whole convention center really needs to step up security. I was there 2 weeks ago for my boyfriend’s sporting tournament and again no security, no bag checking, etc.

I’ll still go next year, and still have a good time. I won’t live life in fear of what could happen. That’s what terrorists want. Live each day to the fullest with no regrets. If I were to die at a gaming convention, at least I would die doing what I love lol.

But in all honesty, Replay FX is great. For $35 for an adult day pass, or $100 to go all 4 days… And unlimited gameplay once you’re inside…. it can’t be beat. We spend more than $35 at Dave and Busters and it’s gone in an hour or two. Replay FX is also open late into the night, midnight this year, and opens at 9am, which is great. For 35 bucks you can play unlimited games for over 12 hours. Like I said, it can’t be beat for great value and more bang for your buck! Highly recommend this event for all gamers, especially those who grew up with retro games like Colecovision, Atari, and old school Nintendo. They had them all, plus Dreamcast and more rare retro finds. Very nostalgic – but I think young kids would enjoy this event too! It’s fun for the whole family.