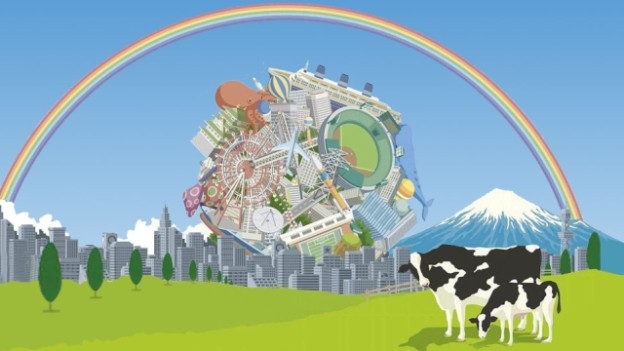 Story: 2/10 The story in Katamari is really silly and crazy (as is much of the game itself). It follows a prince whose father has accidentally destroyed the universe and you find yourself in the role of said, young prince, ordered by your father, to go “roll up” the planets to put them back into the sky; meanwhile your actions are also impacting a human family back on earth whose father is an astronaut who’s unable to travel to the moon due to the king of the universe destroying the cosmos. The story is often told with still images, or silent clips and movies, and really plays a huge backseat compared to the gameplay. The fact is, story is not this game’s strong suit, but it doesn’t NEED to be, because the gameplay stands alone.

Gameplay: 10/10 The gameplay in Katamari is what it’s all about! This game is CRAZY fun and addictive! It’s easily one of my favorite games of all time based solely on gameplay alone. The concept is simple but yet challenging and incredibly fun. You start off as a very small creature given a magic ball with the power to “roll up” any objects which are smaller in diameter than it; you start “rolling up” small objects such as paperclips, buttons, etc; and grow bigger, and as you grow bigger the objects that were obstacles for you before, now get rolled up when you come into contact with them, cars, people, animals, entire buildings, everything in the environment is interactive. If however, you bump into something larger than your current ball, it will break a few pieces of your ball, making you smaller. You are under intense time limits and have to have mad skills to race around the map rolling up as many objects as possible before the time is up while avoiding obstacles which would take away from your mass. You also can rollup “cousins” (other characters to play as), and presents on each level; which give reason to replay some levels to get 100% of the goodies.

Concept: 10/10 As weird, crazy, silly, and possibly drug induced, as this game is, it’s still delightful. At the time of its debut it was a revolutionary, one of a kind, masterpiece that quickly became classic due to its unique concept and fun and addictive gameplay. You do have to wonder what these creators were thinking though. They have some fantastic imaginations, that’s for sure!

Graphics: 8/10 I love the cute, colorful, “sugary sweet” art style of this series of games. However, the polygons are rather simplistic, and the graphics look a bit dated even for their time back then; but I still rate it highly, especially when looking at it from the prospective of my target audience (young female gamers) I think they will love the colorful and zany level designs in this game.

Music: 10/10 The music is one of my favorite parts of this game; and one of my favorite soundtracks of any game. I had the theme song for years as my ring tone 🙂 The track is memorable and distinctive to this series; and it puts me in a happy “peppy” mood and fits the mood of the game perfectly.

I want to stress that this game is “better than a 76” but due to my scoring system I cannot overlook the fact that it essentially has no story or character development; however it’s one of those games that doesn’t really need one! If you ignore those two score marks, then it becomes 56/60 or 93%!! That probably more accurately reflects my own opinion regarding my enjoyment of the game and how much I’d be willing to recommend this game to anyone; but my readers expect story-centric games, and this falls short in that area so I had to give it a more objective review.