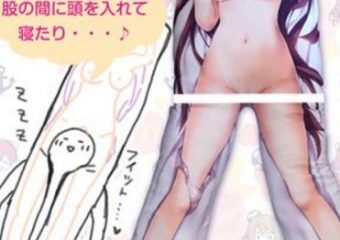 Yes, you heard us well, it really exists. This pillow cover designed by illustrator Konomi is indeed shaped as a Y and really pictures a naked anime girl. You just have to put your pillow in the place of the head and two bolsters in the place of each leg and here you are, in bed with a fictive naked anime girl. Now, what will you do? Just hug it, really? Actually, if you consider the japanese for “hugging”, which is “daku” and also mean “have sex”, you might only “daku” it, but not in the prospect of a quick, chaste squeeze, let’s be realistic.

If only the pillow case would only have one side designed, we could almost believe in the honesty of the pillow designer, telling yourself that nudism is actually part of anime – at least a little -, but really when the pillow case is double-sided, with the character in the process of undressing on one side and completely out of her clothes on the reverse, let’s be honest, there is absolutely no doubt about what the accessory is aiming for.

Nudism in the manga world

And yes, nudism is definitely part of the manga world, let’s not fool ourselves. It is not in all animes, of course, but many show some scenes of nudity, this is certain. Still, it is far from being the central point in our favourite animes and if we like them so much, it is definitely not only for those scenes.

Problem is, if it was just some nudity that was shown, we could understand how fans would get used to see naked people. But they could just take some nudist holidays to fill their craving. Thing is, it is not only nudity but actual sex temptation. And there, even naturist resorts wouldn’t be any help.

So what do people outside the manga world think when they see those kinds of objects as the Y-shaped pillow case? Probably that if the fan didn’t have it, he would maybe fulfill his needs somewhere else, like near schools? Really, such accessories are a shame to the manga world and will never help breaking the taboo on gaming and addiction.