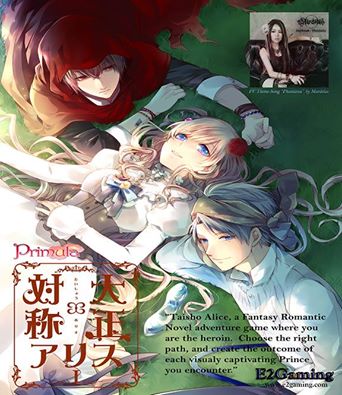 Taisho Alice has just been picked up for a North American Release by E2 Gaming. I found this news on Tumblr and verified it on E2 Gaming’s Facebook Page, where they’ve also announced a new image song for the English release.

Taisho Alice could best be described as a fairytale crossover. The different routes relate to common fairytales such as Snow White, Cinderella, Princess Kaguya, the Wizard of Oz, and of course, Alice in Wonderland.

It is an Otome Game – this is a type of game (generally a visual novel) (a game in which you read, and are prompted at times to make a decision which effects which parts of the story and which endings you will see) in which the main protagonist is a female – There are often (but not always) dating sim elements and a strong focus on romance and relationships – and lots of “eye candy” if you’re into bishounen (beautiful (often anime) men).

It is developed by a company called Primula and this is their debut work. It just released a little over a year ago in Japan – so it is good to see we are already getting news of an official US release. Also looks like it is a PC Game – and no word yet on if there’s plans to port it to consoles as well.

It looks like it was an episodic type of release in Japan – but no news has been revealed about how it will be distributed in North America. It is listed as having a medium to long playtime (which I estimate to be 20-40 hours).

The main story revolves around you (as “Arisu”) going through your mirror just as Alice in Wonderland did. When you get there, genderswapped versions of famous characters come to greet you – including meeting your own double who seemingly has lost his memories. The setting of the game is supposedly a “blend of Japanese and Western”.

I’m really liking the artwork in this game – and even though the concept of fairytales has been done to death in similar games – this one still sounds interesting and has likable characters.

Not much news is available yet – but you can learn more about the game by visiting the following pages:

NOTE SOME OF THESE SOURCES MAY HAVE SPOILERS!!!!