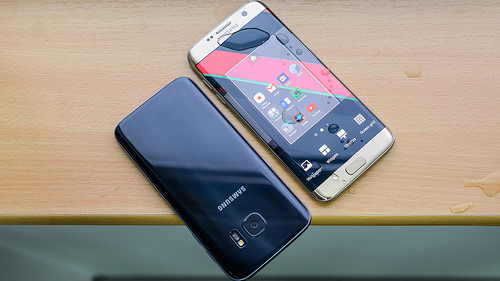 The Samsung Galaxy S7 and S7 Edge smartphones have a lot in common. A casual observer might not even spot differences between the two devices. There are, however, some subtle variations you should think about before deciding which version to buy.

In this smartphone showdown, you’ll learn about what makes each of these smartphones unique so that you can buy the one that best matches your needs.

The S7 Edge’s larger size gives it room for a bigger screen. The S7 has a 5.1-inch screen, while the S7 Edge has a 5.5-inch display. Again, this isn’t something that will make a significant difference to most people. Those who pay attention to the details, however, need to know these things.

The S7 Edge does have an innovative display that extends to the phone’s side edges. This makes it possible for Samsung and other app makers to add edge panels for easy access to favorite apps, shortcuts, news, and other goodies. This is an creative development, but a lot of users don’t seem to care about it. In the end, it just depends on your preference.

Verdict: Depends on your preference.

Consumers tend to focus on battery life when choosing smartphones. No one wants a mobile device that runs out of power halfway through the day. After some complaints that the Galaxy S6 didn’t keep up with expectations, Samsung devoted itself to finding a better option for the S7 generation.

The S7 comes with a 3,000-mAh battery that can last an entire day with normal use. The S7 Edge’s larger size, however, means it can hold a 3,600-mAh battery. That’s not a huge increase, but it may matter to people who constantly use their smartphones.

Realistically, reviewers find that either phone will give you first-rate battery life. At the end of the day, though, the S7 Edge will have about 10 percent more power than the S7.

Verdict: S7 Edge, but only slightly

The Samsung Galaxy S7 has a 12-megapixel rear camera capable of taking brilliant pictures in low-light conditions. Perhaps more important, though, it is the first smartphone camera to feature dual pixels, resulting in faster autofocus. The camera also stands out for its 4K video capability and light-gathering f/1.7 lens.

Samsung gave the S7 Edge the same-resolution cameras as the S7, so there’s not much to compare in this category. Either model, however, can arguably take better pictures than its competitors.

Samsung wisely decided to give the Galaxy S7 and S7 Edge phones identical Snapdragon 820 quad-core processors. The Snapdragon 820 stands out as one of the fastest mobile processors available, so you can expect both phones to stream and run most apps flawlessly and download quickly.

You have to think about price when comparing two of the top-selling smartphones. The Galaxy S7 retails at $699, and the S7 Edge sells for $799. Considering that the S7 and S7 Edge tie in nearly every category, you have to wonder whether the larger screen and innovative edges are worth the extra $100. Of course, you can often get lower prices through some service providers, so if you can find a good deal, go for it.

The Galaxy S7 and S7 Edge have a lot in common, but that doesn’t mean you won’t prefer one over the other. Before you decide which one to purchase, take a careful look at the features and consider how they will affect you. The average consumer may not see significant differences, but smartphone aficionados will likely find one of these designs more attractive than the other.