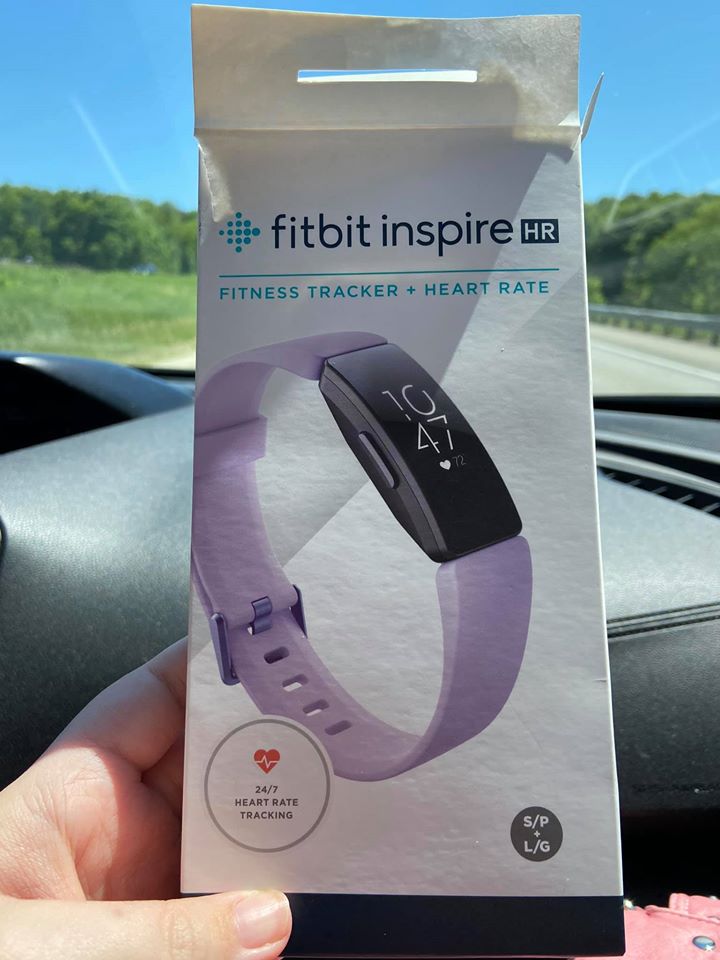 I chose the Fitbit Inspire HR Smartwatch for the following reasons:

I mainly just wanted a watch that could count my steps. Yes a phone does that too, but my phone might not always be with me.

When looking at prices of such Smartwatches online, the black version of Fitbit Inspire HR seemed super reasonable, about $65.

My lavender version however was significantly more expensive at $99. The black version just happened to be on sale, might still be on sale too. And as you may or may not know, you can at any time purchase and swap the bands out for a cuter colored one. I think my watch face edges and back MAY be SLIGHTLY purple, but maybe it’s just my imagination or the reflection of the band.

For $30 more I thought the cuter band was worth it for me, I would’ve ended up paying at least 10-15 before shipping and handling for a 3rd party band anyways so what the hell right? might as well splurge and get a “kawaii” color. It looks nice 🙂 Black is too basic for me – granted black matches a hell of a lot more outfits lol. I may eventually buy a sailor moon or anime style band at a later date…

Anyways so not only was the price attractive but the features too. I like that it does the basics that I wanted, tracking my steps. I’ve been using walking for weight loss lately. I’ve already gone from the 240s to the 220s, still big AF, I know lol. But if you walk 10,000 steps every day, you will lose 1 lb a week or so they keep telling me. I’m in rubbish shape though, both due to lack of exercise, poor diet, and physical illnesses and disabilities that limit my activities.But losing 20 lbs just by walking just in the past 3-4 months is OK with me.

Having the watch on me reminds me to get up and get steps, and motivates me when I see oh wow I got X amount of steps already – I can do this – it’s easy – lets get those steps!

The Fitbit Inspire HR is also waterproof and SWIM PROOF – you can shower or swim with it. I dunno yet if you can go in the ocean, I assume so? I mean chlorine in a pool is probably just as bad – or worse than the sea salt in the ocean.

I LOVE Swimming – I haven’t been swimming yet this summer because of covid closing down the pools – and also because of my aforementioned disabilities – my dr advised me not to swim, because if I have a seizure, I can drown, but I love swimming, so I dunno… I hope eventually I will be able to swim. I also can’t drive right now, for the same reason, dangers of having a seizure, which means I can’t travel far for now.

I have a pool at my apartment but because of covid and regulations it’s not yet open. There are lifeguards and I have friends and family I can go with, so I might maybe try swimming. And the Fitbit Inspire HR can track calories burned by swimming which is as far as I know the only Smartwatch that can do this. Swimming is definitely my most preferred form of exercise. I’m a literal mermaid. I can stay in water allllll day everrrrry dayyy LOL.

Back to the watch… It syncs with your smart phone to provide details about your health through an interactive Fitbit App.

I like the app – I use the Iphone version. I can do all kinds of things with the app. There’s a free premium trial – which I have not tried yet. Premium has even more neat things. But the free version is more than enough. Which is good cuz for almost $100 I don’t want a monthly subscription too on top of an already expensive purchase.

Here are a few of the neat things that the app on the phone can do.

It tracks your steps

It tracks your heartrate

It tracks your sleep – It gives you a sleep score, showing you how much REM, light, and/or deep sleep you got, and how many times you woke up and how much of your sleep time was spent awake.

As a woman it can track your cycle – so you know when to expect your monthly visitor – which is helpful to me when wanting to make big plans/trips/parties/reservations etc – no one wants to go to the beach or a cruise and be cramping to death LOL – For other women looking to start a family, the cycle tracking can help you figure out your ovulation window so you can maximize your chances of becoming pregnant.

The Fitbit Inspire HR is smaller and slimmer than most other Smart Watches. This makes it not great for doing apps and things directly on the watch itself. But that’s not what I wanted to watch for.

You can receive notifications, texts, etc from your smart phone to your Fitbit.

There’s some other things you can do on the watch itself, like time your workout, see the time, see your steps, check the battery life, etc.

Speaking of battery life there is one teensy weensy flaw – but an important one – If your fitbit won’t charge – it’s very likely defective and you should return it for a replacement.

I took back my first one after one day, because it didn’t charge.

The Fitbit Inspire HR is plagued with a charging problem, research online clearly shows many people with this problem. It seems to be hit or miss – maybe a bad batch was released or who knows…

It doesn’t come with the actual part that goes into the wall – but it will work with any Wall/USB charger.

To charge the fitbit, remove the Fitbit from your wrist, line up the ports on the back of the Fitbit with the prongs on the charger. It will buzz as it snaps on and show a battery on the screen with remaining battery life percentage.

If it doesn’t show this battery icon – it’s likely not charging – it may be due to dust or grime or other things – but my first Fit Bit was brand new, only had it for 5-6 hours and I tried it EVERY where, in the car, in the house, in my laptop, multiple outlets in the house, multiple outlets in the car. I cleaned the back of the watch and the charging cable with a dry cloth, and neither were wet or damaged.

I took it back to Best Buy and they just swapped it out for a brand new one, and this new one which I got yesterday so far has no charging problems at all. It works flawlessly…

I’m really impressed with everything that this little smartwatch can do!

And the battery life is fantastic. I had an old Fitbit AND also the VERY first every Apple Smart Watch – YEARRRRRRRRRRRRRS ago – and they could not even make it a full day on a full battery….

You know what the FitBit Inspire HR Battery Life is Advertised as? 5 Days… 5 Days between charges! That’s awesome! I usually let it charge while I’m sitting – like right now while I’m writing this blog post. Because you will want to wear it while you sleep to track your sleep score and you’ll want to wear it while you’re doing anything active to track your steps. So charge it when you’re sitting watching a movie, playing a video game, etc. 🙂 It gets full battery life after maybe an hour or two, and you’re good to go for another 5 days.

I would recommend Fitbit Inspire HR to anyone – especially if you like to swim or workout in the pool :).