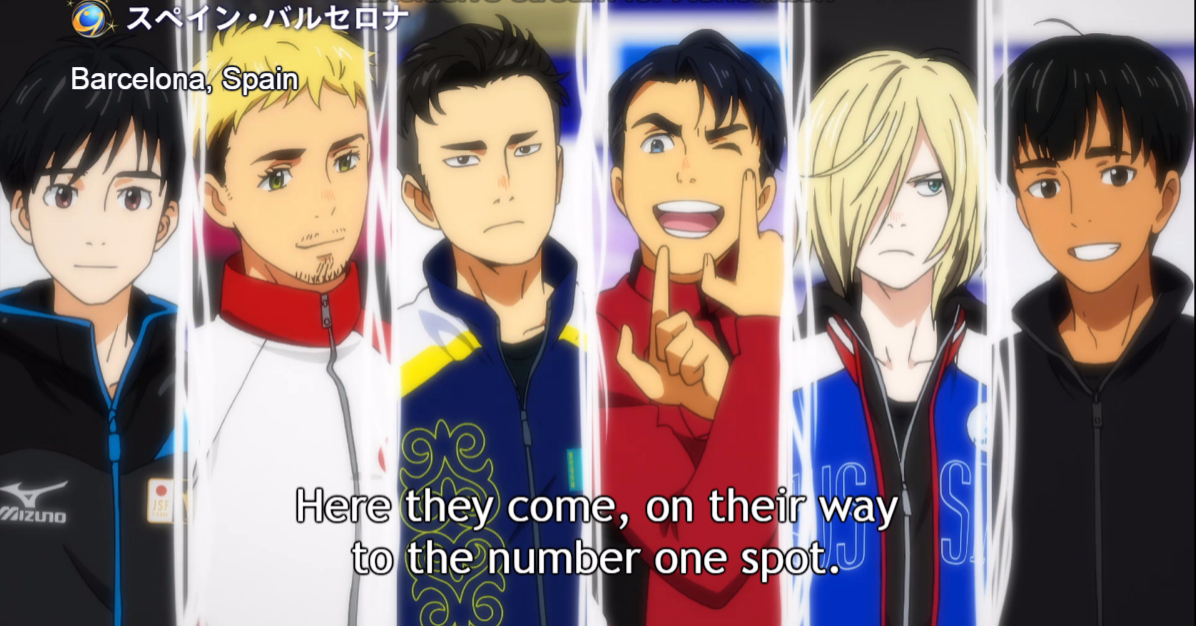 This past week I finally marathoned the anime that everyone’s been talking about. Yuri!!! On Ice won a ton of awards recently in Crunchyroll’s 2016 Anime awards. And not only that, but it’s been gaining unprecedented attention even from people who would not identify as Otaku or Anime fans, including actual real professional Olympic and Competitive Ice Skaters. The series is herald for its beautiful intricate artwork that perfectly captures the movements and expressions of professional ice skaters, as well as a fantastic musical score, and touching love story which stands apart from the rest since it features 2 LGBT males. It handles the relationship in a sweet and innocent and tasteful way, and shows a lot of depth and heart combined with suspense and drama as you watch and learn more about the characters inner most thoughts both on and off the ice.

Length: Season 1 is 12 episodes. Season 2 has been announced but no date set yet

Where to Watch: Crunchyroll

Geeky: 5/5 – The level of difficulty in animating this show is mind blowing. The characters’ movements on the ice feel so lifelike. The soundtrack is also amazing with very memorable opening and ending themes.

Sweetie: 4/5 – There is a lot of comedy, as well as a very heartwarming love story between the main character and his coach. There’s also a cute doggie <3 However, at times, especially later in the series the story can move a lttle too slowly.

Story: 8/10 Yuri has just returned home to Japan after several years of training abroad as a professional Ice Skater. He finished last place in last year’s “Grand Prix” (although he fails to realize that even placing among these 6 finalists is a feat worthy of being proud of.). He returns to Japan unable to face his fans, friends, or family, until a mysterious guest arrives!! It’s Yuri’s life-long idol, Viktor, a famous Russian Figure Skater whom Yuri has always looked up to. Viktor announces that he has taken time off from his professional skating career in order to become Yuri’s coach. During this time he will live side by side with Yuri and things begin to heat up both on and off the ice. I deducted a few points as there are some pacing issues at times and the large amount of “skater jargon” can distract (although it does add realism which is a big plus!)

Characters: 10/10 There are a number of rival figure skaters from around the world. When they hear news of Viktor’s semi-retirement in order to coach Yuri, they have mixed reactions of anger, jealousy, intrigue, disappointment, or amusement.

Viktor’s former coach takes a new skater on to train in Viktor’s absense, who just also happens to named Yuri. This “other” Yuri had been friends with Viktor and Viktor had promised to choregraph his senior skating debut performance. Viktor is rather forgetful however about promises… leaving Yuri to travel to Japan to confront Japanese Yuri and the forgetful Viktor which sets off a heated rivalry which will last all season.

The story follows both Yuris and several other side characters, along with their coaches, as they travel and perform and perfect their skating, leading up to a face off in yet another Grand Prix.

Not only does it focus on the excitement of watching who will advance to the tournament finale, but also on their life, friends, family, and personal relationships both on and off the ice.

Animation: 5/5 – The animation in this series is insane. It seems as if you’re watching real people, real professional figure skaters.

Music: 5/5 – Each skater’s performances are highlighted with unique music scores, just like a real figure skater. Most of these tracks are super catchy, and watching them skate to each track is almost like some weird “Fantasia on Ice” anime. Not only that, but the opening theme and ending theme are both catchy AF and super memorable, both because of the songs and also the animations. The ending theme uses an instagram or snapchat style photo feed and totally brought back feels of Prompto’s Photography skill in FFXV making it very timely and relevant. Both Yuri on Ice and also FFXV also focus on strong male-centric relationships/friendships. The opening theme of Yuri on Ice is in English which is a rare and nice touch, and the animation is done in a sketch-book style of the anime opening.