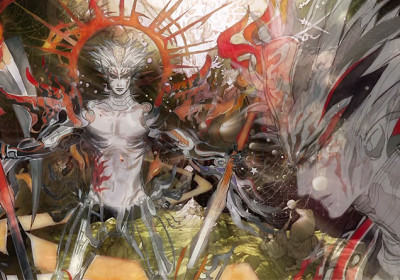 I recently read a review for another game, The Legend of Legacy, over on Techno Buffalo, where they continuously compare the game to SaGa Frontier, because some of the same developers went on to work on the Legend of Legacy. Which looks like a great game for the 3DS by the way (after reading their very in depth review, I really want to play the game now too!).

I also have very fond memories of SaGa Frontier and its sequels. But what I was really reminded of was the fact that at this previous Tokyo Game Show (2015), we were treated with a trailer for a new SaGa game, SaGa Scarlet Grace. And it is very likely, we will get this game in the U.S. As well as our friends in Europe, as Gematsu reported that Squaresoft trademarked the name Saga Scarlet Grace for both markets.

This new game will be the first entry in over a decade in the 25 year old series which first began as Final Fantasy Legends on Gameboy. Many western fans never got to experience the most popular titles (Romancing Saga, and its sequels), and so the series never took off in the same way as it did overseas.

However, despite many criticisms of SaGa Frontier 1 and 2 and Unlimited SaGa, I’m a fan of this series. The games feature multiple player characters and you need to play them all to see all bits and pieces of the story, similar to Live A Live on the SNES (another great RPG that we never got here in the US. but one that has thankfully been fan translated (get patch here)) (on that note, Romancing SaGa has also been translated by US fans which you can get here).

However, Romancing SaGa 2 and 3 have never been fully translated into English by fans yet; only partial translations exist which do simple things like menus and item names, no dialogue which is kinda the whole point of an RPG. There is a full translation for 3 but it’s in Spanish which is useless to me lol. More SaGa games is a good thing; and I’m super excited for SaGa Scarlet Grace!