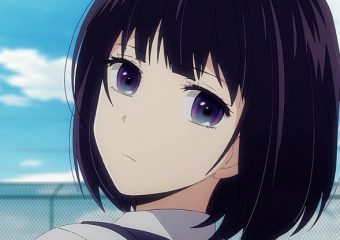 I recently discovered Scum’s Wish from an article describing the relationship between Mugi and Hanabi as abusive. While the anime begins with Mugi and Hanabi both in love with other people and only using each other to satisfy their physical desires, is there really anything inherently wrong with this? People have casual relationships all the time. Not all relationships are built around love.

Not only that, but, I think that love is a feeling that can grow over time. Hanabi and Mugi may not be in love just yet; but that doesn’t mean they won’t fall in love by the end of the anime or manga. There has been much foreshadowing already hinting at this possibility.

Could Hanabi and Mugi ever fall in love or have a happy ending?

Here are some clues that hint that they may be falling for eachother:

In Episode 2: Mugi tells Hanabi “Not all happy things have a happy ending, but you still wouldn’t want to erase them from your memory, and that how should I say, makes you even more unhappy.” — Perhaps Mugi and Hanabi will not have their happy ending, but they will look back not with hatred for eachother, but fondness instead.

In Episode 3, Hanabi starts crying and says that she wants to try to love Mugi

In Episode 2, she gets very aggressive and possessive of Mugi when Moca tries to get close to him.

In Episode 2, Mugi encourages Hanabi to go make friends and gently strokes her hair. Hanabi thinks this is strange and comments that it’s almost like he’s her boyfriend.

In Episode 3, when being naughty together, she thinks Mugi and the act of pleasing Mugi is cute. Mugi also reluctantly here gives in to Hanabi. He feels guilty for thinking (dreaming in this case) of the other girls. He tries to avoid Hanabi’s advances at first. In the end he laments that he is just “destined to be used as a plaything for adolescents”. He doesn’t sound very happy about this. He is hurting too and wants a more affectionate and loving relationship – Granted at this point he still wants it with Akane. He even says he can’t believe he’s satisfied by Hanabi and wishes Akane would “punish” him for it.

In all of the episodes, Hanabi is concerned not only with her own pleasure, but also worried if she’s good enough for Mugi and concerned with pleasing him as well.

The lyrics to the opening song seem to be more about Hanabi X Mugi than Hanabi X Oniichan.

“If Fate existed, I’d like to say, “You’re the one I’m destined to be with”, But I feel those words will destroy what we have right now… so I can’t say them. Even when you’re near you seem so distant. This feeling goes in and out like the tide. I’ll give up. I’ll never give up. An endless game of flower fortune telling. If I’ve lost the key to my treasure box, I’ll embrace my brightest emotions, Hiding their faintly colored remains behind my sighs. When our eyes meet, don’t look away! See through this lie hidden within them. I’m a young playgirl, completely confused, so don’t say anything now. I’m in so much pain. I love you so much it’s frightening.”

If we analyze those lyrics…

“I feel those words will destroy what we have right now so I can’t say them.” This could refer to either Mugi or Oniichan. With Oniichan and Hanabi they’ve been such good friends for so long that she’s afraid of ruining their friendship. With Mugi and Hanabi, she’s afraid of losing their relationship, even if it is purely physical.

“Even when you’re near you seem so distant” – Once again this line could apply to either Mugi or Oniichan. But I think it applies more to Mugi. Oniichan still comes over to have dinner and hang out as a friend with Hanabi, and they’re close, perhaps even inappropriately so, having to remind each other that he is now her teacher and she’s his student, so they don’t really seem distant at all. Mugi on the other hand keeps his emotions and thoughts hidden away from Hanabi, and they are close physically, but he always imagines Hanabi to be Mei or Akane. He doesn’t embrace Hanabi as Hanabi. He therefore in my opinion is always distant, even when they’re intimately close.

But the most telling is the line at the end: “When our eyes meet, don’t look away!” (Don’t think about Akane or Mei) See through this lie. (Her lie that she doesn’t love Mugi). “I’m a young playgirl, completely confused, so don’t say anything now” (Don’t tell me you love me, because I don’t know who I love / I love both of them, hence being a “playgirl” or “confused.) (Also “playgirl” would apply directly to how naughty she is with Mugi. With Oniichan she doesn’t have that type of physical relationship).  And “I’m in so much pain. I love you so much it’s frightening.” This could apply to both Mugi or Oniichan, but when you watch the anime, who or what always makes Hanabi cry… It’s Mugi most of the time. Her relationship with Mugi is painful to her… in the beginning, it’s painful to her because she feels like she’s “cheating” on Oniichan… but as time goes on, and at the end of the most recent episode, she’s crying and says she wants to try to love Mugi.

For Hanabi, the chances of ever having a relationship with Oniichan are small because he is her teacher now, and it would create a scandal. For Mugi, although Akane does fool around secretly with her students, this would not be much better already than his relationship with Hanabi or his past with Mei. Akane isn’t ready to be serious about anyone, and yes, she does inappropriate things with the other students, but this is not love either.

At what point (if any) should you give up on someone that you love, knowing that it just can never work out? What if you began seeking comfort from someone else to help fill that loneliness? In the 2nd Episode of Scum’s Wish it’s hinted at what exactly will happen. Hanabi goes out with some girls from her class. One of the girls is dating 2 boys at once. Now she can’t choose because she loves both of them. Hanabi tells her if she doesn’t choose, she will end up alone. This very likely will be in parallel to what will happen to Hanabi. If she can’t give up her crush on Oniichan, but continues to keep dating Mugi, at some point, she will be in love with both of them. She will become stuck and unable to choose either of them, so she will be left alone.

So what do you think? Can Mugi and Hanabi ever fall in love? Will Hanabi or Mugi let go of their crush and find happiness with one another? Is their relationship really that wrong? I don’t feel that they will regret their relationship either way even if they don’t end up together in the end. I think that they will build enough fond memories together that the overall experience of the relationship will have more happy memories than sad ones despite how it may end.

The other article that I read points out that they could find comfort in other things/people. Which may be true, but I still don’t think that comforting each other through their hard time is really that bad. The original article that I read made it sound as if Hanabi and Mugi turn their backs on their friends and family and only turn to each other. This is not true. Mugi has Moca, Hanabi has Oniichan, her mom, and Ecchan. You also see both of them with other classmates, and it’s even stated in the description of the anime that they are both “Popular” and “well liked” at school. So I don’t think that if the relationship were to end that either of them would fall into a hopeless depression.