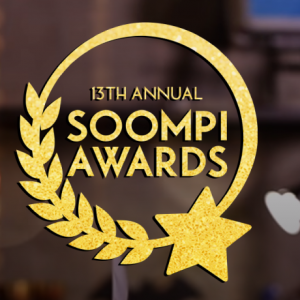 Big Hit Entertainment’s BTS and Globally Acclaimed Series ‘While You Were Sleeping,’ and ‘Goblin’ Lead Nominees from Korean Television and Music

SAN FRANCISCO – January 24, 2018 – Soompi (@Soompi), a division of Rakuten Viki and the leading source for Korean pop culture news and fandom, today announced the nominations for the 13th Annual Soompi Awards, a yearly celebration of the best and brightest television and music that emerged from Korean entertainment this past year. This year’s Awards will also mark the first collaboration with Twitter, which will include both the highly popular #TwitterBestFandom Award and the first-ever Twitter emojis tied to Awards-related hashtags during the voting period from 23 January to 20 February 2018 PST.

Honoring the best in Korean television and music. The 13th Annual #SoompiAwards have officially begun!

Honoring the best in Korean television and music. The 13th Annual #SoompiAwards have officially begun!

The Twitter Best Fandom Award allows fans to vote for their favorite K-Pop groups on Twitter by Tweeting the #TwitterBestFandom hashtag along with the #Team hashtag followed by the name of the group. For example, to vote for BTS, fans can Tweet #TwitterBestFandom #TeamBTS. There are two separate 24-hour voting periods for the Twitter Best Fandom Award: from 3am, 27 January to 3am, 28 January 2018 PST and from 3am, 3 February to 3am, four February 2018 PST. The official list of team hashtags can be found here. Soompi will give away special Twitter Best Fandom boxes to 20 lucky voters, and Twitter will launch another emoji for the #TwitterBestFandom hashtag. Last year, Soompi Awards-related hashtags trended worldwide on Twitter for more than eight consecutive hours, with #TeamGOT7 coming out on top.

Last year, the Soompi Awards gathered an incredible 100 million votes on Soompi.com and on social media platforms like Twitter, more than doubling the 2016 totals, and underscoring the massive global fandom around Korean entertainment.

“Every year, we’re amazed by the passion and support of the global fans of Korean entertainment,” said Susan Kang, Founder of Soompi and Head of Marketing at Rakuten Viki. “This year, our goal is to blow previous online voting numbers out of the water. With our incredible partnerships in place, I’m confident we can show the world just how popular K-Pop and Korean TV is becoming around the globe.”

“Goblin” and “While You Were Sleeping” lead this year’s nominees in the K-Drama categories with 11 and 10 nominations, respectively. Boy group BTS tops the K-pop categories with eight nominations. Nominees are calculated based on Soompi’s weekly music chart and an expert panel comprised of Soompi staff. Other categories include “Actor of the Year” and the “Fuse Music Video of the Year.” The full list of nominations can be found below and online at www.soompi.com/awards.

Fans will be able to vote in the 30 K-Drama and K-pop categories until February 20 on Soompi.com. Winners will be determined by votes from the web and from the Soompi Music Chart. Voting can be found atwww.soompi.com/awards.

Since 2005, the Soompi Awards has been the platform for international fans to celebrate and honor the best in Korean entertainment. Last year’s winners include Lee Min Ho, EXO, and more.

To learn more about the global content available on Viki, please visit Viki.com.

Soompi, the publishing division of Rakuten Viki, is the leader in online communities, news, music and more for K-pop and K-entertainment. Rakuten Viki is a global streaming destination for Asian entertainment, where millions of people watch their favorite TV shows, movies, original Viki productions, as well as curated lifestyle clips and influencer videos — translated into 200+ languages by a community of avid fans. Together, we’re breaking down barriers that stand between great entertainment and its fans, no matter where they are.