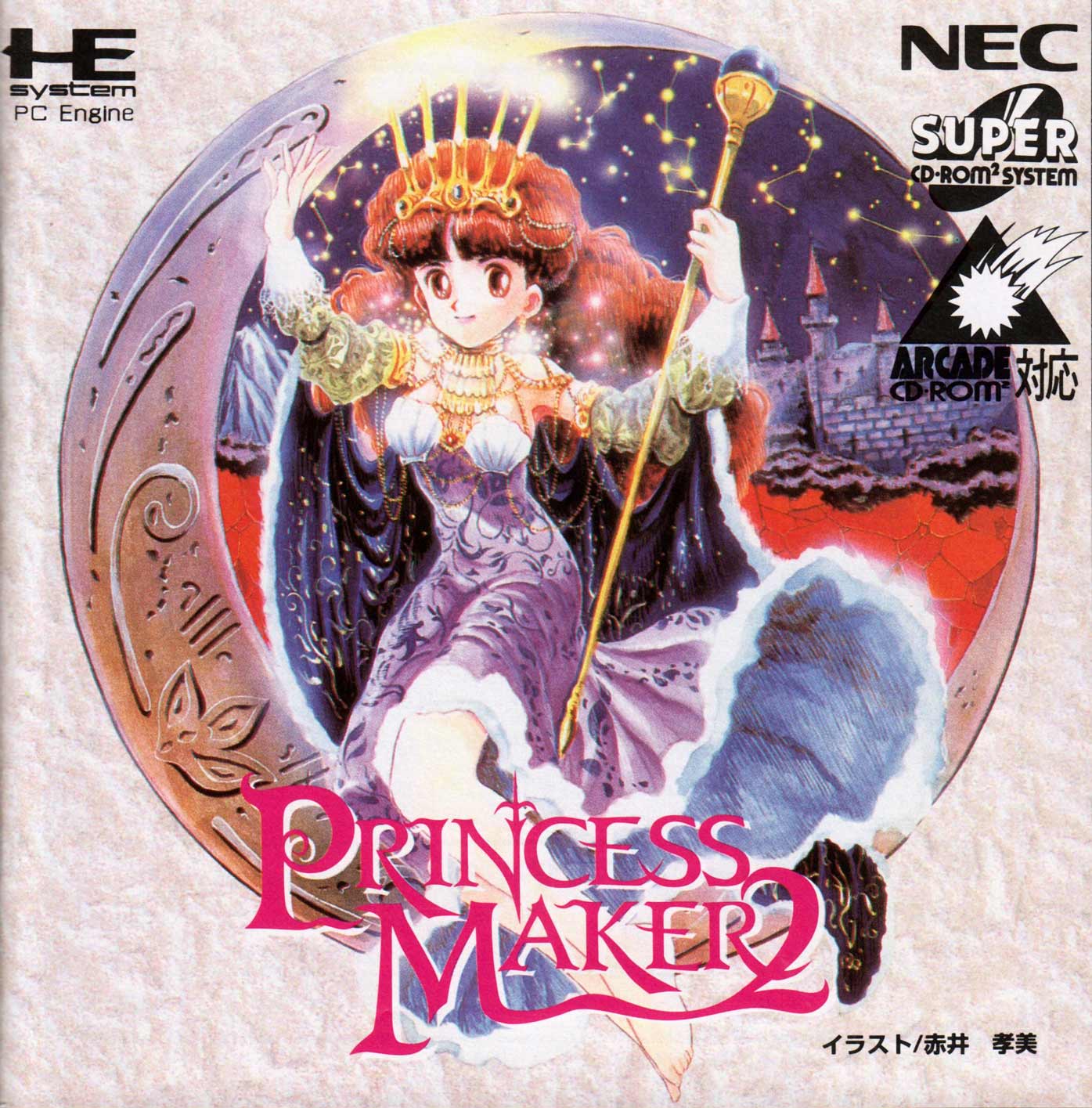 Princess Maker 2 is part of the Princess Maker Franchise – Note – none of these games were ever released in English. Princess Maker 2’s translation was mostly complete – 99.99999% when their licensing agreement fell through and also the game met tough criticism (by American media and press outlets) from people that viewed it as too pedophiliac in nature despite there being absolutely no sex scenes in this game. The (western) world was just not ready for Princess Maker 2 (and may never be ready either).

There are many websites which offer Princess Maker 2 (in English) as “abandonware” however; it is the wish of the creators and those involved in the (failed) localization that you never download or play this game (you can google about that too, there’s copies of letters from people involved in the project all over the internet, in which they remind us that this is NOT abandonware and to not “pirate” the game. — So Take that as you will. It’s a little bit different from a “Fan Translation” in which you can still support the creators by buying the original game and “patching” it with the english translation – in order to play Princess Maker 2 (in a language you can understand), you’re going to have to pirate it – I’m not putting a link here, I’m not condoning it, I’m not promoting it – I’m just telling you, it’s out there, if you search for it and if you care to play it. And that that is the only way to play this game in a language that you can read and understand.

There are many similar, but ultimately inferior, games which have been developed by English speaking fans, drawing inspiration from the Princess Maker franchise. These games include but are not limited to Cutie Knight Deluxe, Prince Maker, Long Live the Queen, and Spirited Heart Deluxe. I recommend checking them out, they’re still great games, but I found myself constantly comparing them to Princess Maker, and found them to be inferior to it in every way (art, story, number of activities, number of endings, variety of things to do, etc.) – That is not to say they are bad games – I own them all and love them – but they are no Princess Maker.

Anyways, Princess Maker 2 is a great game – as are all the other games in the series which I have supported and purchased despite not being able to understand them. There’s even a (relatively) new mobile game – in Korean language which I play on Bluestacks (an android simulator). As far as I know there’s no plans to bring those games to an English audience any time soon. The same people who fan translated Tokimeki Memorial Girl’s Side (which I reviewed here by the way) – had indicated interest in Princess Maker 4 or 5 translation – however, to my knowledge that translation has not even begun yet. Many other translations have begun, but never gotten further than intro or menu translations for any of these games. I sincerely hope, maybe someone in the fan translation community might visit my little blog one day and see that there is a “need” to translate these games which have no hope of ever being commercially released outside of Asian territories.

With all of that out of the way, here’s my review of Princess Maker 2:

Platform: (all different kinds, but the one I’m reviewing is the PC version) (It was also on Sega Saturn, PS2, and more consoles)

Concept: 10/10 You raise a daughter from the age of 8 to 18. You see her grow and change as you manage her schedule in different ways, and you also battle in turn based rpg fights and dungeon crawling elements (I think that feature is unique to Princess Maker 2 – I know some of the other games don’t include the battling / dungeoneering elements.) You lead her to her destiny in dozens of different endings. Her sprite will change to reflect her mood, her condition, and her age as time goes on.

Gameplay: 10/10 You set your girl’s schedule choosing different tasks for her such as cooking, magical battle, dancing, etiquette, visiting the palace, reading, etc, etc. There’s probably about 20 different options to choose from. You can also choose to give her a break by giving her some allowance to go shopping in town, or splurging and taking her on a vacation. She’ll randomly encounter different people, sometimes they will attack her, other times sell or give her items, or sometimes just chat with her all of which may effect her stats. You can also choose to explore dungeons for treasure, items, and more which greatly alter her stats. There’s also a dressup element to the game and what you have her wear also effects her stats. All of these stats and her relationships with all of the other characters are taken into account when deciding what ending you will receive.

Storyline: 7/10 You are a war hero who defeats a demon – the gods are so thankful to you that they grant your lifelong wish for a family – you are all alone, and unmarried. Now you become a single father to a very young cute girl who needs your guidance. The plot is up to you! Will she become a powerful fierce wizard, a war general just like daddy, or a princess in the palace, or maybe she’ll even fall in love with you and become your wife! (which is why the game was so opposed in America lol – dunno why they couldn’t just remove that one ending and release the game still – but whatever, I’m not in the game industry so I dunno all the details, just what I’ve read online. Seems like such a waste to have completed all that work and spent money localizing this game and then cave to media pressure and pull the plug at the 11th hour.) It’s a very loose gloss-over type of plot, that doesn’t get very deep while playing the game, but that branches into dozens and dozens of endings and hidden scenes and lets you chart out your own destiny.

Characters: 6/10 – Most of the characters are not really well fleshed out – It’s not about them it’s about your daughter! You have a cute “demon” butler that assists you (or maybe I’m thinking of one of the other princess maker games) anyways he’s cute and provides some comic relief, but ultimately their character development is pretty low. The other characters you meet, like the guards and prince, and king, etc never really feel very well developed either. — Despite not really having any character development, somehow, it is still an awesome game, you “write” your own story, and decide who your “princess” is. It gives you great freedom of choice on unprecedented levels.

Graphics: 4/10 – They’re “cute” but the graphics in the later installments of this game, are not only “higher quality” but a hell of a lot more “attractive” either “kawaii” (cute) or “sexy” etc. — The characters and graphics in this game, are by no means “ugly” – but their age is definitely showing! There’s also lack of animation of the (large “portrait”) sprites. The smaller sprites you see in training are detailed and animated. There are numerous kawaii cut scenes to unlock with more detailed artwork – but even that artwork is rather pixelated and not as vivid as many other games in this genre. I can’t really give this a high score in artwork. Even the background environments are drab looking. There are other games from the 90s which look way better than this, so it’s not just that it’s “old” either.

Music: 4/10 Uhm, the music was not that great. I think it was just due to the limits of the technology at the time of release. It also was not very memorable.

Customization: 10/10 – Your girl’s figure will change as she grows, she may become athletic looking, frail, fat, strong, etc. She will wear different clothes, even her breasts will change in size, and of course each year she will change and grow more and more. It’s awesome for dressup game fans. Highly recommend.

Kawaii Factor: 10/10 – despite the outdated graphics, there’s some seriously cute moments between you and your daughter. And despite being pixelated she’s still adorable. Actually she reminded me of myself. lol. I have long brown super thick naturally curly hair – so if there ever was an anime character that looked like me, it’d be her haha which helped me to “identify” and “immerse” into the game lol. She grows and evolves into a supposedly beautiful woman – but the art style kinda misses the mark there for me – but still – adorable adorable little game.

Replay Value: 10/10 – Multitude of random events, dozens of ways to plan your schedule, people to talk to, dungeons to explore, and dozens of endings to unlock (I think it has 20 or 30 different endings) — So yes, you will want to keep replaying this game to achieve 100%.