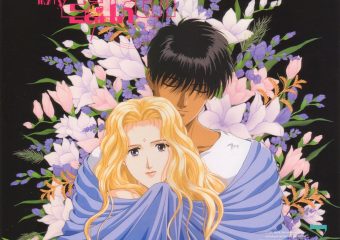 Today I’m reviewing a very old manga / anime which is often credited as being (one of) the first (widely successful) Shoujo manga. Its art and story influenced other mangaka like Naoko Takeuchi – In fact there are many similarities between Please Save My Earth and Sailor Moon.

For example, both Please Save My Earth and Sailor Moon deal with lovers who were reincarnated on another planet having lost memories of their past lives and fated to meet again and remember sometimes happy, sometimes painful and sad memories. Both manga also focus heavily especially on the Earth and the Moon. There’s super powers in each one, and tales of friendship, betrayal, trust, love, jealousy, greed, and bullying.

Please Save My Earth is quite a bit darker than Sailor Moon. It’s more violent, it deals with more adult themes, and pushes some boundaries in what is common for a young girl to be reading.

Both manga also have same sex relationships and other issues that most other comics – or any form of entertainment media – typically shy away from.

Please Save My Earth features a love triangle and a lot more drama and suspense around this relationship dynamic, in fact, the relationship becomes catalyst for some of the series’ action and fighting scenes later.

But at the heart of both manga, you find a love story that has survived even after the main characters’ deaths. The timeless love story with its themes of reincarnation and the endearing characters as well as action and drama make it easy to see why Please Save My Earth is one of the best selling and most influential comics for girls of all time. It sold over 15 million units in Japan alone. Not counting reprints and other editions in other languages.

The English manga is hard to find now as it is out of print. Copies pop up from time to time, but typically sell for over $50 per issue. With 21 issues, things can get expensive quickly. Luckily, thanks to the wonders of technology, there is a cheaper solution. You can get the kindle editions of each volume for around $6 a piece. Click here to see all of the kindle editions of Please Save My Earth Manga.

If you do want the physical editions of the paper back manga, Barnes and Nobles as of this writing currently has most of the volumes in stock for $9.99 each. Much cheaper than amazon. There are a few volumes which are out of stock; and there’s the fact that this manga has been out of print for 10+ years now. So if you’re interested in those out of stock issues you will have to turn to sites like Amazon or Ebay. Here is a link to purchase the paperback Please Save My Earth manga on Barnes and Nobles Website.

The only version of the anime I have ever seen has been horribly butchered and edited – at least I’m assuming it has been significantly altered – I haven’t seen the original source material. If you look closely at the credits of both the dub and the sub English anime versions, you will see it says “Based on the screenplay by so-and-so” Based on? That’s odd. Why wouldn’t it just say “Screenplay written by so and so” – This tells me a lot of liberties were taken with this release.

Even though I’m sure the original screenplay far exceeds any of the English versions, I have never seen it available anywhere online (such as fansubbed, or etc with a more faithful translation.) So all I can do is merely speculate at the existence of some far superior anime than that which I grew up watching as a kid. Despite all of that — It’s still one of my favorite anime of all time.

Sadly, the anime is only about half of the story. It covers the first few volumes of the manga, but there’s still much much more left to be discovered. The anime is good, but really, if you want to understand the whole story, and see it as it was meant to be told without all the editing, then just go read the manga.

This anime is SCREAMING to be remade – from the facts that:

Why has this not happened yet? lol. If I was in an animation studio somewhere… this would be on my radar.

I digress… let’s take a look at the score card below:

This review will kinda combine both the anime and manga into one review, without distinguishing between the two. Whether that is fair or not, I dunno, but they are both similar enough I figure that if one version appeals to you, the other will as well.

Title: Please Save My Earth

Based on the Manga Please Save My Earth By Saki Hiwatari

Anime Length: 6 episodes, 30 minutes each, plus 2 OVA which try to add events which happen before and after the anime some of which are from the manga, others of which are made up for the OVA.

Geeky: 5/5 – I think this manga is sufficiently dark and actiony enough that it will appeal to all geeks regardless of their gender. It has enough action to counter balance against the romance and relationship issues.

Sweetie: 5/5 – Every time I encounter this theme, of reincarnated lovers, I love it. The theme is just so touching and fascinating and makes for the perfect love story. Other similar anime and manga include Air, Big Fish and Begonia, Chinese Ghost Story, Sailor Moon, and Betrayal Knows My Name.

Story: 10/10 – Story in Please Save My Earth is full of mystery and suspense and many plot twists and changes. It also has a ton of romance and very sad moments. As things begin to unfold, the story gets more and more intriguing. The slice of life, super natural, and action, and romance all combine into one epic story about love, sacrifice, loss, and forgiveness.

Characters: 10/10 – The characters are very real feeling, with a lot of deep seated emotions. Each one is learning to struggle with their past life memories which have now resurfaced as they try to figure out how best to save the world. But as you can imagine, having two minds within one body can take its toll on each of them.

Artwork: 2/5 – This anime is ugly, I admit. And the manga isn’t much better, although as the manga progresses we do see the evolution of the artist’s skill and style which is rather fascinating.

Music: 5/5 – I really love the ending theme to the anime, and many of the background tracks.

Voice Acting: 2/5 – Typical 90s voice acting, not that great, but honestly not really that bad either. The original Japanese cast of course is fine.