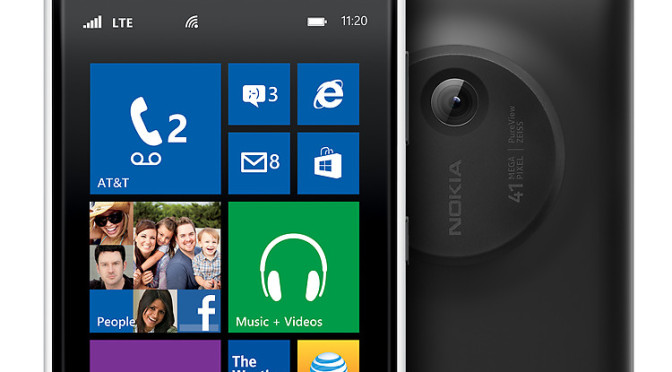 UPDATE 6/22/15 SO I’ve Now Owned This Phone for about a year! Check out my full review HERE

One of the products that I plan to buy sometime in 2014, is the Nokia Lumia 1020. I plan to buy this device for full price out of contract. It’s $500, in this way, but it’s still the most affordable DSLR Camera on the market today. For those who are willing to sign a new contract with AT&T, the camera phone becomes just $99 with a new service agreement.

Even at the $500 price tag though it’s still the best buy for casual photographers who want a cheap DSLR camera. Most similarly priced cameras are only what they call “point and click” cameras. They have lower Megapixels and often are less feature-rich than most DSLR cameras on the market today.The Sony Cybershot Hx300 digital camera is only 20.4 MP and retails for $499. The Canon EOS Rebel T3i digital camera features a meager 18 MP and costs nearly $700. Nikon’s D3300 features 24.2 MP and will retail for $649.95 when it is released later this year.

Well then what would a 40mp camera from another company other than Nokia cost? Far more than any regular non professional photographer would pay. We’re talking upwards of $10,000 just for the camera, then you add on all the lenses and attachments…. they just aren’t intended for the average everyday consumer. The furthest that our consumer technology has come is around 25mp in the “affordable range”. So as Nokia says in their branding and slogan, “nothing else even comes close”. However, this price can vary widely. To illustrate, the two most well known 40 mp cameras on the market today are the ultra compact (but still larger than the nokia lumia 1020), Sigma DP2 Merril, retailing at $1,400 and the big beefy, Pentax 645D retailing around $7,000.

I understand that there are many other considerations aside from just megapixels too when deciding on a DSLR camera.

ISO is a big factor for low light or moving images.

Shutterspeed can also be a decisive factor for many people.

And zoom or macro capabilities are also another consideration to take into account.

It however is left behind when it comes to shutterspeeds and macro shots.

However, it gains points with it’s stylish slim and light weight design which attracts people who are put off by the heavy weight of traveling with a more traditional DSLR.

There are also a number of lenses and attachments available (for any camera phone, not just the nokia lumia) that are compatible as well to help improve your shots.

All and all, for the power and price, as well as it’s compact travel-friendly design, the Nokia Lumia 1020 is revolutionizing casual “consumer” photography. It’s now easier than ever to become a hobby photographer.

It also comes in 3 colors, neon yellow, black, or white. I wish it came in the red color like the newer nokia 1520

For those wanting it as a cellphone, which was it’s original intention afterall, it’s on sale for just 99 dollars with a new contract under AT&T. You can buy it without a contract as well and use it on your own carrier which is what I intend to do. I use walmart’s Straight Talk cell service which is just 45 a month for unlimited talk, text, and data, so I can share all the photos I take easily and quickly to my instagram, facebook, twitter, or email, without having to be near a wifi hotspot. I’ve never used a windows phone so I can’t comment on the interface or phone features itself, stay tuned for a full review in the coming months once I have purchased the Nokia Lumia 1020.