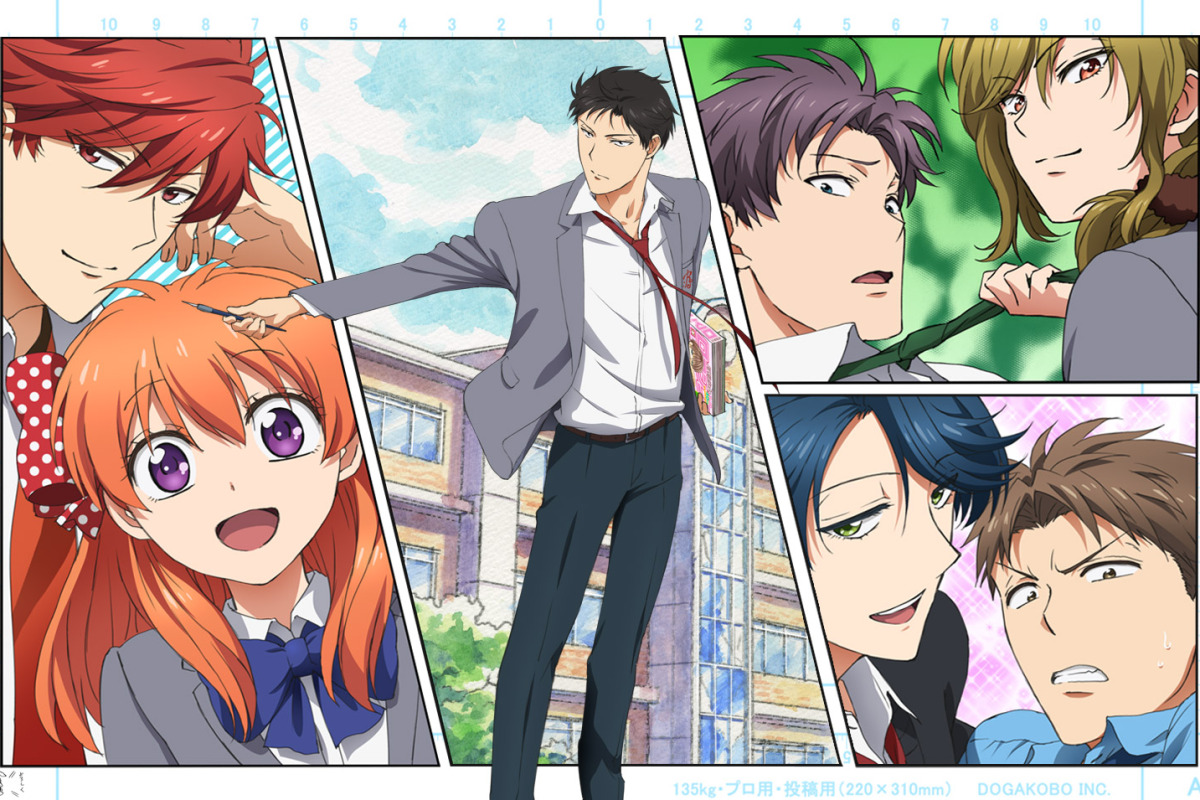 I just finished watching all 12 episodes of Monthly Girl’s Nozaki-Kun. I can’t remember who recommended that I watch this, a year or more ago, and I just now got around to it.

My overall feeling is it’s a cute and short kind of mindless fun comedy anime, with a little bit of romance that never ever really ever goes anywhere.

Here’s a quick spoiler free score card before I dive into the reasons for my score.

Geeky: 2/5 – decent artwork, not much plot, no action, but a lot of comedy

Sweetie: 1/5 – No character development. Not what you’d expect of a shoujo anime.

Characters: 5/10 – EH… I dunno. they’re OK. There’s some interesting tropes and ideas that we don’t see in anime like this – but they just never evolve at all, ever.

Music: 10/10 – I like the ending theme it’s very catchy and kinda matches the whole craziness of this anime lol.

Voice Acting: 10/10 – I thought the casting was spot on and fit most of the tropes of the characters being portrayed.

So in the very first episode we see the main characters Chiyo and Nozaki. Chiyo tries to confess her love to Nozaki but the words she chooses are indirect and Nozaki assumes she is a fan of his manga that he writes. Instead of acknowledging it as a love confession, he simply gives Chiyo his autograph.

Chiyo didn’t know that Nozaki was a shoujo manga artist. She becomes interested in his work and he lets her come over to help him fill in the black part or “beta” of his comics.

Throughout this short series, they are introduced to other friends of Chiyo and Nozaki, mostly class-mates or rivals/work associates of Nozaki. There are some implied love triangles and other minor couples.

But none of the couples really ever get anywhere at all. Including the main 2 couples.

The sidekick couples and characters are amusing in a slapstick comedy way, but have no real meat or substance.

That’s my main complaint. Every episode is basically the same thing. Which can be summed up as:

Nozaki working on manga being oblivious to everyone’s feelings

Mikoshiba being a weeb

Seo being a tomboy or just flat out weird yandere character

Hori being dragged around by Kashima

And Waka being dragged around by Seo

It never changes. This whole story could have been told in one episode.

I really don’t know why this anime is so popular – I hear there might be a season 2 but I expect it to be as pointless as the first.

Sure it might be funny… but it gets repetitive hella fast, yo.

So in the final episode, Chiyo finally confesses her feelings again to Nozaki but there are fireworks going off, so Nozaki misunderstands AGAIN. He replies to Chiyo, but Chiyo doesn’t hear him. She asks him to repeat it, and he leans in and whispers in her ear “I feel the same way…. I love fireworks too”

There’s some debate on the internet about “What if he really did hear her confession” and then one of two things he either confessed to her, and changed his mind/got embarrassed when she asked him to repeat it, or he maybe doesn’t reciprocate Chiyo’s feelings so pretended to not hear so as to not hurt her feelings.

We may never know unless there’s a season 2.

Personally I think he just misheard and misunderstood her again, because that’s what he always does.

At the end though to Chiyo, she realizes, it doesn’t matter.

And I agree very very much with that.

We give our love unconditionally as humans to another human.

Those feelings we feel are still VERY real and very valid.

So I can say that maybe that was the point of this whole crazy ride.

Chiyo realizes in the final episode. She tells him “I’m pretty sure you just think of me as another one of your friends but I know now that I will always, always, always… love you.”

Just being with Nozaki and being in the moment, watching the fireworks, laughing and being close to him… that was enough for Chiyo.

Chiyo is glowing and laughing, even after she realizes that her feelings were not received. She is truly happy. Just living in that small moment. It will be a memory she will cherish for the rest of her life. A memory of her first love.

I think Chiyo is the only character who grew at all. But I think in the end she found her own happiness coming to terms with just a good friendship with Nozaki. They agree to create a new manga together about their time at the festival and the fireworks they watched together. And that’s it. It’s a wrap.