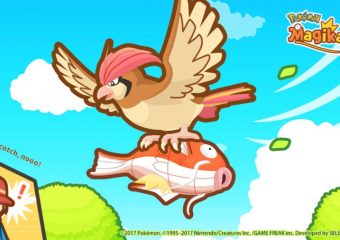 Geeky: 3/5 Gameplay is simple, but production values are surprisingly high. This title is sure to appeal to all Pokemon fans who will see not just Magikarp, but many of their other favorite Pokemon as well.

Sweetie: 5/5 – Adorable 2D colorful monster taming game with everyone’s favorite most useless unloved Magikarp as the main character. This game is full of a lot of heart and charm.

Overview: 10/10 Magikarp Jump is a cute, free, seemingly innocent Pokemon Game for Mobile IOS and Android devices. The gameplay is very simplistic and reminiscent of Monster Rancher in that you take home a pet to train and raise and enter league battles. Pretty basic stuff, right? But actually it is perhaps one of the darkest Pokemon Games of all time, because for the first time ever, your Pokemon can die! There is no going back into their Pokeballs, and no amount of healing from Nurse Joy can bring a KoiKing back after he has become lunch for a wild flying Pokemon.

Gameplay: 7/10 Alright, so being a free mobile game, the gameplay, as you might expect is pretty primitive, but yet, oddly addictive. You begin the game by choosing a fishing rod (your first one will be given to you), and fishing up your very own Magikarp.

The karps come in different colors and patterns, and also have unique stats and bonuses. The main stat that your karp has to worry about is JP (Jumping Points). These determine how high your Magikarp can jump in special league battles where you face off against computer controlled AI opponents.

You can raise JP in one of the following ways:

Training your Magikarp, in randomly selected training regimens. You get 3 TP (Training Points) that will refill over time and/or refill when your trainer rank increases and/or refill as a result of a random event.

Speaking of random events, there are lots of them, and they can either make, or break, your karp. You are given a choice here… to try the events or ignore them… If you do try them, and fail, you may lose your karp forever! Or your karp may lose several hundred or even several thousand JP. However, if you succeed, your karp may earn several thousand JP, or you may be given the special currency “diamonds” which are rare and usually only given during league battles or quest rewards (or purchased with real currency).

These diamonds let you buy other Pokemon to come help cheer your karp on and decorate your pond. These Pokemon have time activated abilities that will grant a permanent amount of JP to your karp, as well as appearing at random to give a temporary boost to your karp’s JP in each league battle. I’ve seen as little as a 5% increase, to as much as a 25% increase so far.

Your time with each karp is relatively short, especially early on in the game. Once they reach max level they are taken to the league battles to try one more time for the hall of fame. They can continue battling until they lose a match and then they are retired. They might float around in your tank in the background from time to time, and clicking on them will show their name and JP, but they serve no other purpose. If your karp dies (yes, this really happens), he will be immediately retired, and of course will not appear in your tank. After a karp dies or retires, you will be tasked with selecting a new fishing rod, and fishing up a new karp.

As you raise your karp your rank as a trainer goes up which in turn, raises the max level for the karps you can fish up. If you do a good job raising your karp, you also get a permanent motivation bonus that allows the new karps to earn JP at an increased rate.

Your tank can be decorated with themes that change the background of the tank, or decorations which add stat bonus such as increasing JP from food or training, or increasing coins found from random events, etc.

The Pokemon “friends”, food, training regimens, and decorations can all be purchased from either the coin or diamond shops, and then also “invested” into after purchasing to continue to power and level up their effects and usefulness. As your rank increases, new food, friends, training regimens, and decorations will become available for purchase. Pokemon friends are also sometimes given as league battle rewards.

The game is simple and addicting and very cute too. However, there are some missed opportunities that could make the game more fun. It’d be nice to have online play with other players to be able to challenge their karps. It’d also be nice to have an online leader board tracking the highest jumps from Magikarps all around the world. And lastly, it’d be really nice to customize the look of the trainer character to make them more personalized.

Despite these flaws, the gameplay is solid, though repetitive, and yet strangely addictive. I spent way too much time this weekend playing Magikarp Jump.

Story: 6/10 There is a story, though I can’t say it’s terribly good. It is a super cute story, with detail and fleshed out at least in the intro. They introduce a new “professor” type character, this time a mayor, who serves as your guide. They set up an intro to the game by describing the town (name escapes me), and explaining that the quiet little town loves Magikarp and that all the residents participate in league battles to see whose Magikarp can jump the highest, but that lately, the Magikarp don’t seem as motivated as they used to be, and so something mysterious must be going on, and maybe you will be the one to raise a Magikarp again who can jump into the sky. I mean it’s brief, and not overly deep, but honestly, it’s about as deep or interesting as any of the actual Pokemon games or anime. Pokemon is not well known for story. I’m not far enough into the game yet to see where the story goes, if it goes anywhere at all, or if it just leaves it as an introduction. I’ll give it the benefit of doubt and give it a 6 instead of a 5 “average”. The extra point because it’s cute, and set up in such a way very similar to the story telling of the actual Pokemon games.

Characters: 6/10 The worst part about the character system is not being able to customize your trainer character. We don’t even get to name them or choose a gender. This is a step back from almost every “modern” Pokemon game over the last several years.

Despite that small complaint, the other characters will all make any Pokemon fan feel right at home, from the “Mayor” who is basically taking the “professor” like role, to the Magikarps themselves, to the “Pokemon Friends” which range from classic favorites such as Pikachu, to more modern Pokemon such as Litten. I’m sure future updates will add more Pokemon Friends as well.

Character depth from a story standpoint is weak or even nonexistent. But the inclusion of fan-favorite Pokemon, in a game where Pokemon are the main characters, is sure to please old and new fans of the franchise alike.

Graphics: 10/10 The graphics, like everything in this game are super cute. Your Pokemon friends may be sleeping or playing on the screen, your loveable, ugly-but-cute, goofy, karps and you will forge a bond as you train them which endears them to you. Your tank can be customized with all sorts of decorations, and the karps come in various common and rare colors and patterns. The animations during training are quite cute as well. Everything is very brightly colored, and surprisingly “detailed” and full of personality for a cute simple 2D game.

Music: 6/10: Like most Pokemon games, the music is cute, snappy, and cheerful, full of fighting spirit and creates an atmosphere of innocence and adventure.

Replay Value: 10/10 – Since your time with each individual karp is so short, and you are forced to start over with your “current” league that your last karp left off in, and the levels and progress of your karps goes up bit by bit, you will have to play through multiple generations. I’m up to about Generation 8 now with the last karp maxing out around 53,000 JP I think. Some of my league opponents have upwards of 60k JP, so it will take me a few more generations before I can claim my next league badge. There’s also the collecting of decorations, Pokemon friends, and different colors and patterns of karps which makes playing more exciting for those who love to collect new things. Hopefully they continue to add new items and karp colors in future updates. Would love to even see some time-limited releases for items/karp colors in the future.

I love Magikarp, and after playing Magikarp jump, you will love him too! Next time, can we get a mobile game for the other underdog Pokemon, such as Psyduck?