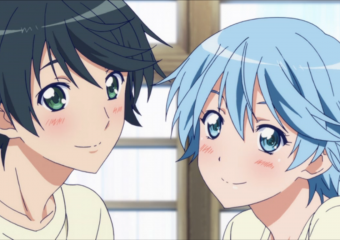 Fuuka is a relatively new anime that is part of Crunchyroll’s Winter Simulcast lineup. You can watch Fuuka for free on Crunchyroll here.

Fuuka is very similar to other band slice of life anime such as Beck Mongolian Chop Squad or Nana. If you like either of these anime, I think you’ll also enjoy Fuuka.

Check out my “Early Review” for episodes 1 through 4 of Fuuka below, and catch Episode 5 on Crunchyroll Friday at 11:00am EST.

Related Media: Fuuka is a sequel to another anime called Suzuka. Fuuka is actually the daughter of one of the main characters in Suzuka. Both Fuuka and Suzuka also have manga adaptations, and Fuuka’s manga is currently still running with new material.

PS: You can enjoy this series without watching Suzuka – I had never heard of Suzuka until I was researching my blog post tonight – and only just started watching Fuuka tonight too and already in love with it. It’s definitely “my kind” of anime! Suzuka is similar but instead of a love triangle in a band, it’s a love triangle in a sports anime. I may marathon it this week while waiting for the next episode of Fuuka :).

Where to watch: Crunchyroll

Geeky: 3/5 – The animation and music are both highlights in this series with extremely high production values; however the slow plot and short overall length of the series could alienate some fans.

Sweetie: 4/5 Awesome characters and story with love as a huge focus and slice of life about kids starting a band. Took away one heart for huge amounts of fanservice.

Concept: 9/10 – It’s not terribly original. (-1 point) It’s been done before, and probably done better before too… but Overall, I am in love with the premise of this series. Two childhood friends drift appear, reconnecting years later – One is well on their way to fulfilling their dreams and promises; while the other simply drifts aimlessly through life until a key event occurs which puts them also on the path to their destiny.

There is a huge love triangle/love rivalry at the center of this drama. There’s also huge  amounts of significant character growth and development. Already just within 4 episodes, we’ve witnessed the main character overcome his fears and shyness and learn to speak up, and we’ve seen already several relationship ups and downs.

As for the female lead whom is the namesake of this show, we’ve watched her, also like the male lead, go from wandering aimlessly, to having a purpose and a goal and a vision. We’ve also seen that although she can essentially be a tomboy, that she too gets shy and awkward at times, and has trouble expressing her feelings.

Also within just 4 episodes we’ve watched them find and recruit all of the necessary members for their band, and even put on an impromptu performance.

Story: 10/10 – If relationship drama and slice of life is not your cup of tea, you will not be too interested in this — However, for me, it’s my favorite genre; and yes, although there are similar anime dealing with “band drama” (Beck, Nana, Your Lie in April, and White Album to name only a very small few) — I still find the concept refreshing and enjoyable.

To put it simply, the story revolves around a love triangle between “music geeks” who are pursuing their dreams of becoming either solo artists or rock band musicians. I’d like to say “pretty sure we know how the triangle will end” given the name of the show… but that is not necessarily true you know~!! Similar Manga such as Nana have had a lot of failed relationships and couples that you’d think should be together, but aren’t.

It could just be that Fuuka goes on to become an idol and fulfill her dream (which is to sing). She could go on to become a strong, independent character — she already is so much stronger than the more emotionally weak (but successful already in her singing career) love rival that she’s pitted against.

Though we do witness weak, tender, and vulnerable sides of Fuuka as well. At this point it’s anyone’s guess how the story will go. Who will Yuu choose? Or perhaps none of those relationships will pan out.

Aside from the love triangle, you witness the day-to-day struggles of performing music, and see the characters at school, work, and home, typical slice of life stuff here.

Characters 10/10: The story begins by introducing the male lead, Yuu, who will become the bass player for the band. He is a very shy and awkward soft-spoken boy who finds escapism online and has difficulty connecting with others face to face.

One day he meets the namesake of the series, Fuuka, as she’s dashing across the street and bumps into him, because he is so busy looking at his phone. This creates a misunderstanding about why he was using his phone, and it won’t be the last misunderstanding between them either.

Fuuka is an extremely energetic and bright young girl who has a strong tomboy streak and acts very unlady-like at most times. Like a lot of young people, she wonders what she should be doing with her life. One day, she gets free concert tickets to a live event. As they’re walking home, she begins to sing, and finds encouragement and feedback from Yuu, which causes her to impulsively want to form a band. She pretty much forces Yuu to go along with her idea, and Yuu can’t say no at this point, because his personality is weak, and Fuuka is very dominant at this point.

They also enlist the help of a classmate who is charming and good looking but “not interested in girls” as he himself says lol. He becomes the keyboard artist for the group.

Lastly, they recruit an upper classman who has been pestering Fuuka to join the track and field team oneday when he lets it slip that his big brother used to be a drummer; thus, he too becomes a drummer like his brother.

As mentioned, there’s also a very prominent love rival in the form of a childhood friend of the main character.

The main character also lives in a house full of females (enter more copious amounts of fanservice). And a cast of side characters consisting of teachers and advisers who also happen to be former band-mates who have taken the new members under the wing.

Anyways, most of all, I can’t explain but the namesake of this show is just so darn cute sometimes (in her actions and facial expressions). And there are some truly cute moments between both “couples” in the series… It’s definitely the cute characters that make this series for me, especially Fuuka!

Artwork: 4/5 I love the artwork in this series; they way their eyes are drawn and the detail and light in their eyes is especially pretty. However — could do without the huge amounts of blatant fanservice.

Music: 5/5 – Thankfully this is really, really good; I mean it’s an anime about music, so it’d better be good right? lol. Crunchyroll for some reason doesn’t have subtitles on the opening or ending theme which is a bummer, but no fault of course of this anime and just a fail on Crunchy’s part.

The music is fast paced, and more “J-Rock” infused. Once again similar in ways to Beck and Nana with the same “vibe”. There are also a few tracks (from the love rival) which are definitely more soft and Pop inspired.