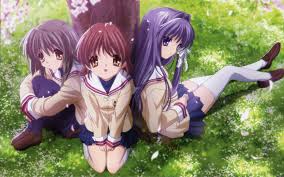 I ordered it. (Mostly because I won some paypal money last week, so I only had to put about 9 dollars with it, to get it, otherwise I wouldve waited til after the holidays, so many other things need my money and attention right now.)

I’ve played the fan translated version years ago…. It’s one of my favorite novels ever.

But let’s check the math here…..

Clannad (English version) had a very successful kickstarter campaign. They estimated they could make this project happen for $140,000. They raised almost $600,000 during their kickstarter period – and who knows how much raised additionally through other backing methods.

They did not have to hire / pay programmers, developers, artists, etc. Edit to add – Okay, I concede, that they did have to have someone with some technical / programming know how to insert the freshly translated script, but that’s no where near on the skill level (and thus wages) necessary to build a game from scratch to finish, especially one the size of Clannad. All of that was done for them by the Japanese Developers at “Key”.

Yet somehow, they weren’t satisfied with their already $500,000 in profit.

I get it, okay, the Game Industry is a business, not unlike any other. The whole point is to make a profit.

But come on. This game is 10 years old. Have they done no market research?! BRAND NEW visual novels – Or even BRAND NEW “AAA” titles are releasing for a fraction of this price.

This is what I would expect to pay for Fallout 4, or the next Final Fantasy, or the next Assassins Creed — NOT what I would expect to pay for a 10 year old Novel, in which the person making these profits has done VERY little of the “heavy lifting”. The game was essentially already there, already complete. All they did was translate it. Which fans have already been doing for years, for free.

Now I’m not trying to be ungrateful. I’m not saying that companies should back off and let fans translate things. I’m not saying that no one should make money or bring these types of games to the masses. After all, I bought the game. Paid my pennies. Why? Because, dammit we NEED more visual novels. How else are we ever going to get them, unless we SHOW other developers “There’s gold in them there hills” right? Right.

But they could have STILL made a profit (they already made one just by kickstarter before the game even released lol) by selling the game for a more reasonable price such as $29.99 or even $39.99…. But $49.99? That’s just greedy. I don’t think they’ll be selling too many at that price. They could have probably made MORE money by having a more reasonable price point (and therefore selling more copies).

Still, you should go buy this overpriced visual novel too – because it’s worth the fifty bucks (It has over 80 hours of gameplay (you’re paying a little over $2 an hour for entertainment, which is reasonable) It has great characters and a very heart moving story), and because we need to “rise up” as a fanbase and show them, put our money where our mouth is, and show the world that we demand more visual novels.

I’ll be reviewing the game shortly. 🙂 I need to replay it again first to refresh my memory as it’s been several years since my last play through Clannad.

Anyways, sorry to rant. Thank you, Sekai Project, for making this game. Really. I hope it is a success for you and your company so that you may continue to bring us other visual novel games – like maybe Kanon? I love Kanon too. I just needed to get my ranting off my chest. I’m used to paying around $25-30 for visual novels and just kinda appalled by the price point chosen for this title. Still, I did not hesitate to throw my money at the screen, because I truly believe Clannad to be a title worthy of that price.