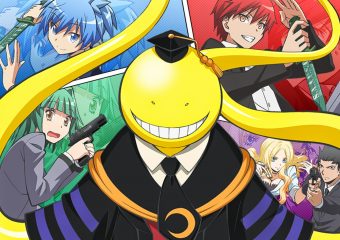 Title: Assassination Classroom
Genre: Comedy, Action, Slice of Life
Studio: Lerche
Original Release Date: 2015
Based On: Assassination Classroom Manga by Yūsei Matsui
Length: Season 1 is 22 episodes, Season 2 has 25 episodes, for a total of 47 episodes. There is also a spin off series called Koro-Sensei Q and several animated and live action films and OVAs. There’s even a game (only in Japanese) by Bandai.

Where to watch: Crunchyroll has season 1. But they do not have season 2 Funimation has seasons 1 and 2. You can subscribe to both Crunchyroll and Funimation – and some other anime/scifi networks for $9.99 a month in a new service called VRV at https://vrv.co/. They both also have Koro-Sensei Quest. From what I can tell neither of them have the movies or OVAs available.

Sweetie: 5/5 Surprisingly, this may not seem like a “sweet” anime at first glance, but Koro-Sensei is adorable, and also a very good, thoughtful, kind teacher who loves his students. This anime is full of just as many heartfelt moments as it is full of comedy and action.

Overview: 10/10 Assassination Classroom is first and foremost a slice of life anime. Each episode focuses on a different student or faculty member and how Koro-Sensei helps them with whatever turmoil they are experiencing while at school. Assassination Classroom is also very much a comedy anime, as if you can’t tell by just looking at the design for Koro-Sensei. He is a murderous demon lord with a sweet tooth, love for super hero movies, and kind heart, but that still doesn’t mean he won’t destroy the earth. Although Koro-Sensei may be a villain that the other students must defeat, it is hard to not fall in love with Koro and his classroom. Each episode does have action, with the students trying to defeat their teacher, but each episode also is full of tender sweet moments, and lots of very wtf moments and comedy as well.

Koro-Sensei is not such a bad guy though. He earnestly wants his students to succeed in defeating him. He also takes interest in each of his students, wanting to ensure they have a happy school life. The students he is teaching are part of Class-E referred to as the “Garbage Class”. The lowest scoring students, as well as delinquents and trouble makers of their school.

Koro is joined by additional faculty members, appointed by the school or by the government, to further train the students to kill Koro before the deadline. New students also come to the classroom as well. They all begin to get along and begin to experience a happy school life under Koro’s guidance.

Koro could best be described as a squid like creature. He makes (ridiculously cute) squishing sounds when he walks, has a sweet tooth, and unique super powers. He can travel at mach 20 speeds, regenerate his tentacles, clone himself, change forms, shed his skin, and other unique abilities that make him nearly impossible for his students to kill.

Little else is known about Koro-Sensei. As the story goes on, more is revealed about his past, his connections to the school, and the real reason why the students must defeat him before graduation. Note: I haven’t finished watching this anime yet, but that’s basically what the synopsis from wikipedia explains as the story. I’m up to episode 16 out of 47, so there’s still a lot to learn.

Wanting to learn the real reasons behind Koro-Sensei’s request to teach at that school, and learn more about Koro Sensei himself keeps the story moving, and keeps the viewer interested with morbid curiosity.

However, the story does at times move a little slow, like most slice of life anime. There are a lot of filler episodes, and after awhile, it becomes a bit predictable. My friend also likes to point out how unrealistic the story is, because if the moon was destroyed it would have a major impact on the Earth, and thus make Koro’s threats to destroy the Earth a moot point. This in no way detracts from the enjoyment of the show, but in trying to be objective, I would say those are the flaws of the show.

Characters: 10/10 One really unique thing about this anime is how each episode highlights a different character. You come to know the back stories of all 27 of the students, faculty members, and Koro-Sensei. There clearly are 2 or 3 students that are more “important” than others, but overall, each of the characters are given a chance to shine, and each of them are fleshed out in detail with their own troubles and school-life struggles which Koro guides them to overcome.  Each character is so unique that they even (very slightly) alter every single opening theme song animation to include the new students. You get a sense that the classroom is like a close family. Koro begins doing exceptionally nice things for his students, taking them on trips, planting a garden, building a swimming pool, and of course encouraging them to stand up to the other students who bully them in the school. Character development is one of the key things that keeps this anime moving, watching the students in Class E begin to believe in themselves, and come together with a common goal (to kill their teacher.).

Art: 6/10 – Some of the character designs seem kinda wonky… but they are actually done in a style similar to the manga. Koro is super cute, and most of the students look distinctive. The animation style is clean, but simple, and not overly detailed. There’s nothing mind blowing about the animation, but it is still modern, clean, and fresh.

Voice Acting: 10/10 – Koro Sensei alone has one of the best voice actors, with a very distinctive evil laugh, that is more cute than it is terrifying. The other cast members are also very talented, but less memorable than Koro.

Music: 6/10 – The music is a bit hit or miss. The first opening and ending themes are really catchy. I’m not as much a fan of the 2nd themes. Background music is good, but not overly remarkable.